Written in response to the piece ‘Mindy Kaling is not your pioneer’ by Alex E. Jung in Al Jazeera America. Original article here: http://america.aljazeera.com/opinions/2015/1/mindy-project-racetv.html 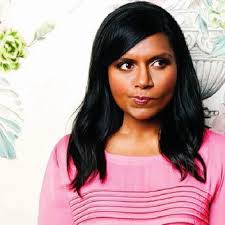 I’m sorry for the pretentious quote (it’s from W.B. Yeats’ ‘Adam’s Curse’ by the bye, for those who are interested). One of my professors gave me a great piece of writing advice in my third year of college: ‘Never open with a quote,’ he said, ‘let the reader hear your voice straightaway.’ Then he paused and added, ‘Also it sounds incredibly annoying.’

I try to stick by those guidelines, but something about the topic today just called out desperately for a quote, and that one has been bouncing around in my head all day, ever since I read this article on how Mindy Kaling, and her on-screen alter ego, Mindy Lahiri, are not/is not a pioneer. The Yeats quote, for some reason, sums up my feelings perfectly, but I would add an extra dash to it:

‘To be a coloured woman in entertainment is to know/ That you must labour to be everything’.

The author of this article has one major problem with Mindy Kaling, and that’s this: she is not a pioneer for Asian-American women. At least, not enough of one. She uses the age-old rom-com formula of ‘ upwardly mobile white Americans whose aspirations are to find love; its women tend to find belonging by marrying the right man.’  And worse, she does this by dating only white men.

Alex Jung (the author) makes a number of good points, I will admit that. He says that Kaling, through this character, is ‘the [perpetuating] the great lie of romance, which suggests that love and marriage are not somehow informed by class, race and gender conventions.’ By dating and settling down with a white man, Lahiri, the character,seeks the ‘ultimate assimilation’ into the American context, a specially white American context. 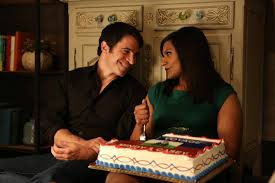 Mindy and her boyfriend, Danny Castellano (played by Chris Messina)

He points out that we know nothing of Lahiri’s parents, that none of her partners or she herself comment on her Indian heritage (even her very Christian boyfriend, Casey, says the reason he cannot be with her is because she is ‘selfish’, not because she is a Hindu) and that she seems to be a ‘character simply born of the imagined community of lovelorn career women whose identities are defined purely by what they buy’. Instead of revolutionizing and reworking the conventions of the 90s rom com, Kaling has adopted it unapologetically, and simply inserted herself into the lead role.

Kaling’s own response to her success has been double pronged: on the one hand, she has gone on record stating that she ‘embraces’ her position as a role model for younger women, specifically younger Indian-American women. On the other hand, she’s also said that refuses to be ‘treated as an outsider’ and made a token representative of her race. In other words, she seeks to beat the majorly white entertainment establishment by ignoring her ‘otherness’ altogether, and thereby urging others to ignore what many might see as a handicap in their own quest for success.

This deliberate negating of her ‘race’ as a potential issue, and thereby as a constituent of her character’s identity in The Mindy Project, is what Jung seems to take offence at. There is a difference between denying something and ignoring it—Jung accuses Mindy of denying the importance of race in something like romantic relationships or professional dynamics; I think Kaling simply ignores that her character’s race and non-white upbringing might be an issue and thereby, in some ways, presents an even more revolutionary perspective. What would it be like to live in a world where it really didn’t matter if you were Indian-American and are unburdened by societal expectations and cultural baggage? That’s Mindy Lahiri’s world.

Second—on the character’s decision to date only ‘white’ men. Mindy Lahiri is NOT Mindy Kaling. Mindy Lahiri is an overblown, ridiculous, gossipy and extremely selfish character—even her creator thinks so. Lahiri’s life and decisions are not something anyone should seek to emulate, except perhaps for her professional credentials (which, in Season 3, she seems to be really working on). It’s the same way no one can possibly look to Michael Scott, Steve Carrell’s character on The Office, for guidance. Is it not possible that Lahiri is an object of spoof here—that her decision to only date a certain kind of man shows more about her character than it does about Kaling’s racial politics? 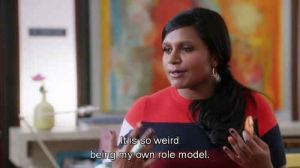 Can you take this character seriously?

And finally—why does Kaling have to face these questions at all? What sort of responsibility does she have to her audience that someone like, say, Charlie Sheen or Lisa Kudrow doesn’t? Charlie Sheen could play a drunken, debauched man on Two and a Half Men and no one called him out on the terrible representation of Malibu residents. The two were not conflated as the same person (which is funny considering that, based on all reports, Charlie is much more similar to his onscreen character than Mindy is). Kudrow’s character on FRIENDS, Phoebe Buffay, dates a series of men over the course of show, but not one of them is non-white. In fact, the only character on that show who dated anyone ‘not of his race’ was Ross, possibly the least popular of the six.

By expecting Kaling to answer questions that other, non-minority actors don’t have to is a form of discrimination. By asking her work to showcase her ‘difference’ from the run of the mill show runner is also ascribing her a ‘token representative’ status, it is implying that she is not like the others. It’s pretty much the equivalent of someone asking you why you made angel cake when you are Indian—can’t you make halwa instead? Maybe you don’t want to make the halwa. Maybe angel cake is what you love and want and damned if you haven’t worked hard on learning the recipe. If you can make that angel cake better than anyone else in your class can, why not go ahead and do it?

Kaling is an entertainer, a performer, and forcing her to handle the unresolved tensions of an entire society is unfair. She is not in her line of work to speak for the Indian-American community, she is there to make a successful career out of it. Kaling’s fun, smart and she’s certainly broken a number of barriers for women in television, but don’t expect her to be a culture-mascot or a politically-correct watchdog; don’t expect her to be ‘everything’.