The end of the world—such a cliched backdrop for a fantasy novel, wouldn’t you say? Most of them have world ending (or at least civilisation ending) stakes. And speculative fiction, Atwood style, uses the end of the world as a given; it’s what you do afterwards that counts, and forms the meat of the story. 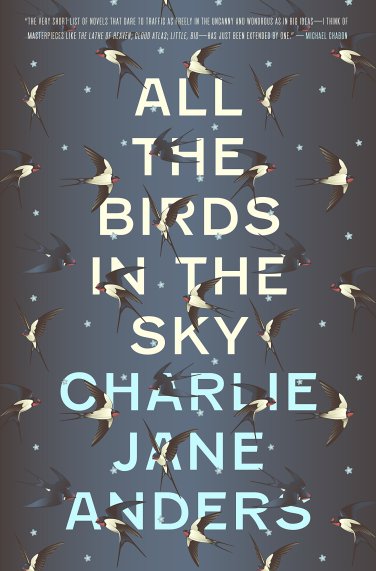 Charlie Jane Anders’s All the Birds in the Sky is a blend of two things: on the one hand, it’s a fantasy, about growing up different, weathering the alienating world of high school and its mainstream cliches, and finding a place when you’re older, a place that happens to have magic and/or incredibly advanced science and, perhaps best of all, people who appreciate those things. On the other, it’s a love story set in a teetering world, like Atwood’s MadAddam trilogy, where ecological disasters are on the horizon, and no one can do anything to stop them. Except maybe they can. Except they really can’t. Except…well, we don’t know.

It’s not a surprise that the co founder and editor of io9, one of the leading SFF/geek culture sites on the internet, should spin out a novel that deftly blends genres, traditions and continually defies expectations. All the Birds follows two characters: Patricia and Laurence, a witch and a scientist respectively, from their days of stumbling around in childhood, through a beleaguered friendship in middle school, and then the tests and trials of adulthood, where they find themselves on opposing sides in a race to save humanity from its self-created destruction. The binaries in the novel seem fairly simple: the witches, Patricia’s people, are ‘for’ Nature, while the scientists are willing to wreck what’s left of it in order to privilege and thus save human civilization. The witches cannot stand idly by while human ego dooms all other living creatures, and thus begins a face-off between two sets of powerful cabals. Laurence and Patricia will find their feelings and friendship tested, in the grand tradition of many, many love stories.

I’ll admit, it took me a while to really get ‘into’ the book. This is because Anders’s writing in the early chapters seems more redolent of a children’s book than a sweeping SFF saga—but this is a deliberate effect. Like the Potter books, Anders sought to make her narrative tone ‘grow’ with her characters, with the result that the first few chapters use simple language, and sentences are almost painfully blunt in terms of descriptive effect. The first Potter book followed an 11 year old; the first chapter of All the Birds follows a six year old—you can imagine the tonal difference between the two. But don’t let that seeming ‘immaturity’ throw you off, or let you assume that this is a book for ‘kids’. It proves, after a point, that it is very definitely not for younger readers.

My favourite part of the book was the closest it has to a ‘villain’—Theodolphus Rose. A trained assassin from a ‘Nameless’ school, the bits about him were almost Snicket-like, absurd and comic and in that wonderful territory between children’s and adult fiction. I felt like it was here, talking about his exercises, his strange messages from fellow ‘assassins’ that Anders really let herself have fun, and it shows. Honestly, I wish there had been more about him, or more writing that showed this hilarious side. Anders has a talent for it, and I hope she harnesses it more often.

Should you read it? Yes, because it’s just so refreshingly different, and yet familiar. Like I said, it uses some of the typical tropes of speculative fiction, and fantasy, but blends them in a manner I haven’t seen much of before. It is quite beautiful in parts, and also addresses the very millennial angst of growing up believing yourself to be special, and not having anything to do with that belief later in life. In fact, people are constantly pulling Patricia down as a matter of duty, telling her that ‘Aggrandizement,’ the idea that she is personally responsible for saving anyone, let alone the world, is a dangerous one, and can only lead to terrible things. This seems to be a theme in what I call ‘secret world fantasy’, like The Magicians, the problems that come with balancing the ‘real world’ and its adult mundanity with beliefs in ‘specialness’ or ‘Chosenness’ that are inherent to fantasy. Anders doesn’t dwell on it exhaustively the way Grossman does, but deftly pulls it like a running stitch through her embroidery of her characters, and leaves you thinking about it all the same. 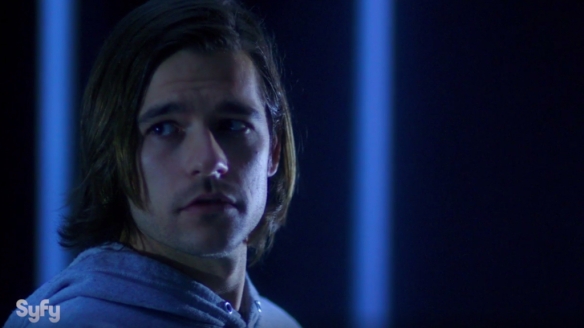