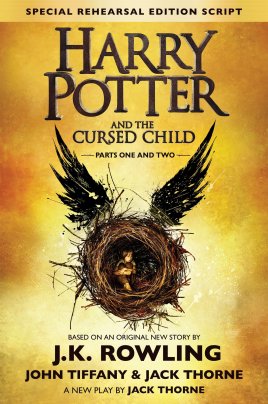 There be liberal spoilers for Cursed Child below.

There were many things I didn’t like about Harry Potter and the Cursed Child. I read it in a haze of disbelief, often resorting to texting a friend in the format Harry made so famous in Order of the Phoenix: using all-caps to communicate my rage and frustration. ‘How is this a thing?’ I demanded at one point, and her responses, which ranged along the lines of ‘I knew you would say that’ did little to soothe me.

It’s been a couple of weeks now since the ordeal, and while I’ve safely moved on and begun reading other, less disappointing follow-ups to fantasy series, I haven’t been able to get some of Cursed Child’s more startling ‘revelations’ out of my head. So much about the story didn’t make sense given the context of Rowling’s carefully built world, and the themes she espoused with such fervour in the Potter books. Just one tiny, but irritating example: people went around saying ‘By Dumbledore!’ or ‘Thank Dumbledore!’ the same way they say ‘Thank God’ in the ‘real world’. In Deathly Hallows, Rowling made it very clear that no one, least of all Dumbledore, is perfect, god-like. In fact, she took care to point out that he was much more flawed than many other characters, including Harry. So to suddenly raise him on this pedestal was not just alarming, it was so profoundly antithetical to all she had drilled into us before.

And let’s not even get into that ridiculous stuff about Voldemort having a child. Not only do I seriously doubt he was physically capable of conceiving one (the ‘man’ was built of a dead person’s bones, Pettigrew’s severed hand, Harry’s blood and a baby form that had

been reared on snake ‘milk’ and had no nose—are we expected to believe he had a penis?), but why on earth would he want one at all? He believed he was immortal, so there was no need for him to have an heir, and second, at no point has Voldemort ever been shown as capable of experiencing feelings as ‘human’ as love, or even lust. He had one goal, and I sincerely doubt child rearing would have been anything but a hindrance to it.

So yeah, many things bothered me. There was the Panju nonsense, the fact that Ron was a blundering idiot, that Ginny existed merely to soothe Harry and her son (whatever happened to her important career?), that Hermione had little to no security on her office (seriously, the same woman who was part of a plan to get into the Ministry at the age of 17 using Polyjuice Potion wouldn’t ensure the glitch wasn’t repaired when she was Minister?), that the Fidelius charm makes zilch sense to me anymore (if Lily and James were under the charm when they were in Godric’s Hollow, how were Harry and company able to see them when they traveled back in time? Pettigrew had never revealed the secret to them!), and that’s just scratching the surface. If I start talking about how the Time Turner was just the worst plot device ever, I’ll probably implode.

But what really bothered me was Harry, and his lack of relationship with this child, Albus. For whatever reason, Albus seems to have always had a victim complex. Perhaps it was the result of growing up with James for a brother; in a curious twist, the kids seem a lot like the people they were named after, James being popular, brash and sure of himself, and Albus ‘Severus’ the misunderstood misfit, whose need for attention drives him to do silly and ultimately, destructive things. So much for the whole ‘we are more than our abilities and blood’ spiel that the Hogwarts years were all about; so much for nothing but choices, much less names, deciding our fate.

In the Epilogue to Hallows, it looked like history was set to repeat itself in certain ways: Rose was already being touted as the smart kid, this time blessed with a magical background that she didn’t have to scramble for; Scorpius was the designated enemy, the one to be beaten, and Albus was, well, Albus was most like Harry. Not only had he inherited the green eyes, the ones that Severus basically threw his life away for (still not getting over that), but he had the insecurity and worries that plagued Harry too. It was to him that Harry imparted the secret of his own Sorting, so readers could be forgiven for thinking that out of all his kids, Albus was the one who Harry understood best.

Evidently not. So much for Harry’s saying he doesn’t mind if Albus ends up in Slytherin, since his Sorting is what seems to set the ball rolling, culminating in a surprising declaration about Harry sometimes not wanting him as a son. While I completely agree that, given his own history, Harry is likely to be a lousy father, it was still a huge surprise that Albus, and not someone like, say, James, brought this on. Albus is the kid who is actually most like Harry: awkward, unsure of himself, holding onto one friend rather than making pals with loads of students. Harry too had faced the burden of history and expectation during his early years in school, and been alternately mocked, feared by, or lauded by peers. Hogwarts was never smooth sailing for him, and whatever happened in Year 6, before that, his time was marked by a less than stellar experience. Whether it was the aftermath of losing a landslide of points during his first year, being shunned for speaking Parseltongue, derided for fainting before Dementors, or haunted by whispers of death during Sirius’s escape from Azkaban, not to forget the anger that followed his announcement as Hogwarts champion, Harry knows what it’s like to not be understood or liked by Hogwarts students. So it’s really stunning that seeing what’s happening to his son, he does little to nothing about it for three whole years. When he does confront Albus, it’s with spectacularly bad results.

Ultimately, this is my major problem with Cursed Child. It’s not so much the ridiculous plot and the ridiculous turns and devices it employs to make its ridiculous ‘progress’, but what it does to the things we think we ‘know’ about these characters. Would Hermione simply hot-headedly cancel meetings and show up at Hogwarts with no plan? Would Ron just joke around and give out love potions, like he’s never done something more daring than leave the shop alone for a day? And would Harry, who’s seen so much and gone through so much shit himself, act out the way he does with a son who, more than any of his other kids, seems to bring to life the worst aspects of his own time at Hogwarts? Maybe they would, and maybe he would, but I’d prefer not to know it, thanks. I’d prefer to think he’d be a little more sensitive about it.

But oh well, that’s the price of not letting an end be the end.