If given space, I could wax eloquent about Indian and Indian-inspired fantasy for days on end. I can tell you all the problems that (I think) beset it, and how these are not any fault of the writers, but the curious definition of ‘fantasy’, such a Western one that depends on a certain severance from belief and faith. Can you write Christian fantasy, for instance, without running into trouble and the waters of offence? Philip Pullman tried, and succeeded, to a certain extent, but I’d argue that the moment he waded into Bible-heavy streams, his books lost much of their magic and power to dazzle, instead walking along the edge of becoming transparently ‘agenda’-driven. Same with C.S. Lewis, who did it a trifle more hamfistedly decades ago. Myth fic in India is plagued by the same troubles, with few authors managing to break the shackles of received wisdom and create something new from the bricks of the old: Samit Basu is a notable example, and some of the newer authors, like Shweta Taneja and Indra Das, have made strides here as well. 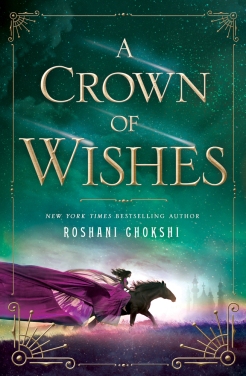 And well, so has Roshni Chokshi. Here, I reviewed her debut novel, The Star Touched Queen. I called it a ‘fairy tale that strides through the cosmos, refusing to be bound to one particular location, though it is quite culturally rooted in a Hindu setting/tradition. Her follow up, the literal ‘sister’ to the first novel is A Crown of Wishes, which tells the story of Gauri, princess of Bharata, and Vikram, the Fox Prince of Ujijain. It is, like its predecessor, a love story, but it also bears some of the more recognizable elements of the fairy tale, especially given its reliance on that staple: the tournament, and its related, seemingly impossible, tasks.

Betrayed by her brother and cast out from her kingdom, Gauri finds herself at the mercy of Vikram, the prince of the neighbouring empire of Ujijain. Vikram has just received an invitation to compete in a tournament held by Kubera, the God of Wealth. He must enlist with a partner, and the prize, should they win through the three tasks set for them, is a wish apiece. Desperate to prove himself a worthy successor to the throne, and not remain the ‘puppet king’ his father’s council seeks to make of him, Vikram convinces Gauri to partner with him. Not only will she escape the death that awaits her in Ujijain, but this way, she can see to winning a wish of her own, and seeking vengeance against her brother, who holds her kingdom and her friend, Nalini, hostage.

What unfolds is an adventure story that moves between worlds and kingdoms, from the glittering harem of Ujijain to the Otherworldly Night Bazar (the site of much drama in TSTQ), from the craggy fortress of the vanars to the glittering wish-granting fantasy of Alaka, the kingdom of the Lord of Wealth and his consort, the Kauveri River. Gauri and Vikram find themselves tested in increasingly harrowing ways, and learn truths about themselves and each other (well, it’s a fairy tale—that’s sort of de rigeur). But along the way, they also make a friend, who is perhaps the most compelling character in the book: Asha, a conflicted vishakanya, who dreams of living a life unmarred by poison. Asha kills everything she touches, and can see through to a person’s deepest desires, but she cannot do something as simple as bathe her feet in water, or stroke a bed of grass without someone or something else paying the price for her actions. She longs, like the Little Mermaid, to be part of a world that at once lusts after and fears her, and out of curiosity, befriends and helps these two strange humans, who are so lost in her magical world.

A Crown of Wishes carries forward Chokshi’s worldbuilding, her creation of a place where Hindu myth comfortably divests itself of the ‘religious’ overtones that both distort and elevate it, instead using its characters and some of its concepts in creative ways to populate and push her story forward. The vanars of Ramayana fame here become an abandoned people, left behind by their queen Tara on her pursuit for vengeance. The Serpent King, a descendent of Kaliya, become a pathos-ridden, Hades-like figure, scorned for his alleged rape of the Kapila River. Their story becomes a tale within this larger tale, and a mirror to that of Maya and Amar, one of misunderstanding and secrets, and a desire to reach out to another, alien soul.

In an interview with Bustle, Chokshi speaks of writing for ‘second culture kids’, those who are not native Indians, but children of the diaspora. These are kids whose ‘exposure was different, but whose claim to those tales is the same.’ ‘It’s a weird limbo’ she acknowledges, but it definitely works well in her case, if this is the result. Chokshi’s ‘limbo’ state might have allowed her to free herself of the derivative prisons that myth, and adherence to its, so often imposes on writers, giving her free rein with the colourful figures and plots that are so rife in Hindu mythology. As a native Indian reader myself, I can only enjoy this liberated look at what’s so often churned out unexamined, and hope that there will be more to come. While Chokshi may have moved on to different projects (her next series is set in ‘a darkly glamorous Paris’), there’s plenty of space for other authors to take up the challenge, and continue the task of building an Indian fantasy trove that works both here and for kids of second, indeed, third or entirely ‘other’ cultures. We’ll just have to wait and see.